On September 9th, 4 of my colleagues and I took part in the famous (or maybe infamous should be the word I use) Three Peaks Challenge. We were taking part in such a feat for a great cause that we wanted to raise funds for called BrainsTrust.

What does the Three Peaks Challenge entail I hear you ask? The premise is that you climb (slash clamber) to the top of the three highest points in the UK…in 24 hours! I thought it sounded crazy at first as well and without much thought, consideration or idea of how I would complete such a task, I put myself forward. The climbing team were excited and scared of what we had put ourselves up for, but we knew the reason we were doing it so we got to planning.

The plan was to take the somewhat traditional route by starting over in Scotland and climbing to the top of Ben Nevis. After that we would drive to Scarfel Pike in England, concluding the challenge with Mount Snowdon down in Wales. We had the route mapped out, we had our driver, we had our car booked. We were ready! Ready until things started to go slightly south from the start of our journey.

Arriving in Glasgow airport after a 7am flight we were already tired. Any time one of the team mentioned how tired they were, someone quickly reminded them that they wouldn’t sleep for a further 24 hours anyway so they better get used to it. The first stop was picking up our car. This 9 seater would be big enough to dry our wet clothing on the lengthy drives between mountains, get enough sleep and have enough space to stretch out. Our idea of a nice spacious cruise was quickly scampered by the fact the company said our 9 seater had been in an accident. We were stuck with a 7 seater. Sounds good until you put 3 people who are over 6’2″, the driver, another 2 not so tall people and all of our equipment. No space was an understatement! Not ones to quit at the first hurdle, we packed up our stuff and hit the road.

With around a 3 hour drive to the bottom of our first mountain Ben Nevis, the team were jubilant (probably due to the masses of surgery items we had stocked up on at the pit stop along the way). The weather seemed clear and we proceeded to put on the gear and start climbing.

Starting this mountain at around 3pm was ideal. Visibility was great and the path seemed clearly laid out. It was relatively well trodden ground so we felt as if we knew the correct direction. We were also aware that there was a more advanced path that we did not want to take! We were all rookies after all. Rocky, uneven ground. Yeah it was expected. Slight rain. Also inevitable. We expected about 5 hours up and down so we asked people coming the opposite way down how we were doing for time. It seemed like no matter how far up we were, the same answer was echoed each time! ‘About 2 more hours up, by the way guys the weather is terrible today, be careful’.

We heeded the warnings but proceeded to move forward. When people said that the weather was bad that was a massive understatement! The rain was torrential and was literally the worst kind of rain I had ever seen. I felt bad for the team member with no hood. The wind was insanely overpowering and had even the biggest in the group was nearly grounded a few times. Very aware that a 50 plus kilometre sheer drop was on your side made this even more nerve racking.  The five of us noticed we were the last ones left on the mountain at that point. Being as untrained in the art of mountaineering as we were, and with the increasing deterioration of the weather, we all pondered whether continuing was the smartest thing to do. Myself and another member of the team surged ahead by about 60 meters only to nearly get blown over by what one of the earlier passers by described as ‘100 mph plus winds’. We looked back to see the gap increasing while the others discussed the option of turning back.

It seemed like the peak was in sight but we thought this 30 minutes before. With everything stacked against us, our equipment absolutely soaked (including my phone which was in my not so waterproof waterproofs), we decided for our safety to start our descent. It was a hard decision knowing we were so close to the top to turn back, but on this occasion it was the only smart decision to make. We began our 5 mile trek down. By this point we were all completely soaked, but the mood was still good. The climb down was actually harder then the climb up. We had been warned this by everyone that had attempted the challenge before us. After the near 2 hour decent back to the car, we were cold, wet and slyly annoyed at the fact we seemed so close but stopped near the top, but extremely proud of what we had achieved so far. We packed up our stuff, removed our wet clothing and proceeded to the next mountain! 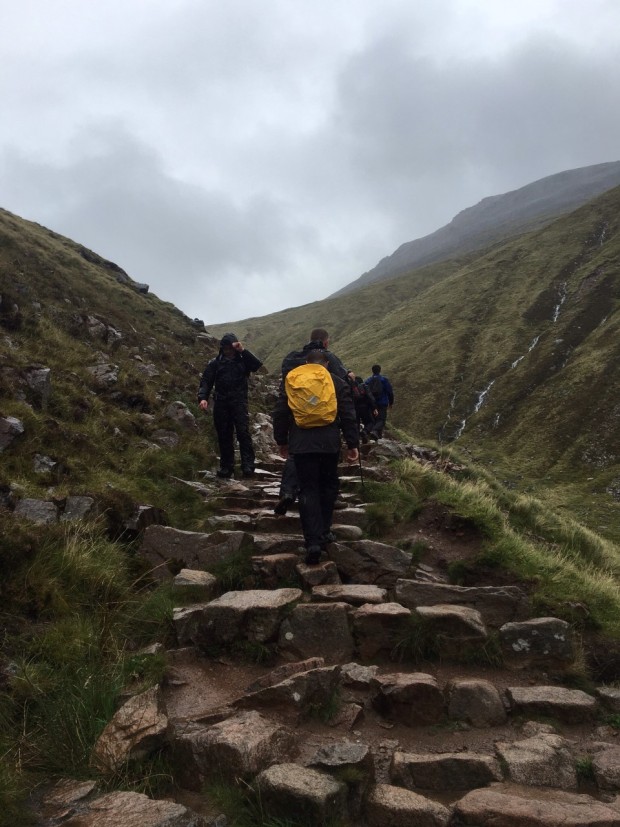 Have you ever attempted the Three Peaks Challenge? Or have you ever tried to take on Ben Nevis? Have you been thinking about attempting any challenge like this? Let me know by commenting in the box below.